PC motherboards are challenging to purchase. People who shop for motherboards—whether as an upgrade component or for a project to construct a PC from the ground up—are a smart group who feel comfortable taking their PC(personal computer) apart and putting it back together. If you are building your PC you must know how to connect a power supply to the motherboard.

However, the terminology used to describe motherboards can be confusing, and some of it can even baffle seasoned PC builders. For maintenance purposes, you might be wondering to clean a motherboard.

However, novice purchasers and builders must have some prior knowledge before making a motherboard purchase. As there are Terms You Need to Know when you buy a motherboard.

20 Terms You Need to Know when you buy a motherboard: (PDF)

A complementing motherboard is usually the next item you choose for your setup after choosing a CPU(Central Processing Unit). One of the most intricate computer parts is the motherboard, so when you buy one, consumers frequently struggle to understand its specifications and phrases.

The term “form factor” refers to the size and configuration of a certain desktop motherboard. You need to know which of the common board form factors the PC case accepts in order to be certain that a certain board will fit inside.

The basic input/output system (BIOS) is a long-standing piece of firmware that controls your computer before it boots up and enters the operating-system environment. The outdated BIOS, which had a number of built-in limitations, was modernized in the twenty-first century as UEFI (Unified Extensible Firmware Interface).

The I/O shield is a square-shaped metal plate with potentially sharp edges that fits into a void on the rear of your computer casing.

MOSFET(metal-oxide-semiconductor field-effect transistor) for Metal Oxide Semiconductor Field Effect The transistor, a kind of field effect transistor, is used in computer motherboards to control voltage. MOSFETs are distinguished by their low strength design, frequently indicated by the letters RDS (on), which results in less heat being produced.

The computer fan is connected through a four-pin connection. The motherboard typically includes a fan and proportional plug, therefore more fans are needed the larger the motherboard.

Dual In-line DIMM Memory Modules are the sort that accepts the system’s RAM system through slots on the motherboard (often two or four), and have twice as many mainboard data lines as SIMM. Memory is secured in place by sliders on either one or both sides.

Video cards, TV tuners, and other motherboard-based components can be installed in PCIe slots, which are expansion slots on the motherboard.

SLI and CrossFireX refer to a motherboard’s capacity to employ several graphics cards and function fluidly in order to boost graphics performance. Scalable Link Interface, the standard that supports Nvidia GeForce graphics cards, while CrossFireX supports AMD Radeon cards, is what SLI stands for. These cards must often share the same graphics processor.

The USB Header, which has two types—USB 2.0 and USB 3.0—of pin connectors, is one type found on the motherboard. These connections are used to join wires within the computer case so that the USB connector can be hooked into the front of the chassis (font panel).

A network of pins on the motherboard that receives wires from the computer case makes up the front end of the chassis. Some of these pins will be color-coded or labeled.

The word “chipset” refers to the motherboard silicon that serves as a controller and a path between various computer subsystems.

12. AC ’97 and HD Audio (Audio accessory connector on the front of the chassis – Audio Header Font):

A cable with a 10-pin plug connector connects the inside of the case to the headphone and microphone jacks used in the majority of computer enclosures. This connector plugs into a battery—now known as an “HD audio” plug—on the motherboard.

When switching between these two connectors, the motherboard’s “AC” 97 connectors malfunctioned.

The common interface for discs in home and office PCs is called Serial ATA, or SATA for short. Hard drives, SSDs, and optical drives all use it.

A motherboard connector is ATX 24 pin. ATX power connectors were divided into 20 batteries and 4 batteries at the time of the mid-2000 changeover.

On a modern motherboard, the CPU power connector connects a Molex-type power supply, which is typically located next to the real CPU socket, using a 4-pin connector (split into 2 and 2) and 8 batteries (divided into 2 and 4).

The motherboard’s CPU Socket, which is square in shape, serves as the CPU’s foundation. Each type of processor socket must be compatible with the others.

The A and E-Series CPUs from AMD are referred to by this name since they provide graphics acceleration. It stands for Accelerated Processing Init and depending on when they were produced, these chips use AM4, FM2, and FM2 + sockets.

These electronic parts, which are dispersed over a typical motherboard and used in a number of subsystems, primarily serve as “holding pens” for electrical charge.

Complementary Metal-Oxide-Semiconductor, or CMOS, is a memory array on the system board that houses the BIOS and other settings and controls the system clock.

The debug LED, which is frequently seen on high-end motherboards, is a very useful feature for both novice and experienced PC builders. If the computer cannot boot, it displays error codes on a (often two-digit) readout.

What Form Factor (ATX, Micro-ATX, Mini-ATX and Case Should a Motherboard Have?

The motherboard is one of the most crucial parts of a computer, which makes understanding motherboard testing all the more crucial. You must be well conversant with the 10 Motherboard Components And Their Function in order to achieve that.

One of the most important factors to choose when choosing a motherboard is its form factor, along with the CPU socket.

Choose a motherboard for your new computer that will support the CPU you want and fit in the case you selected. The size of the case and the type of motherboard it supports are more crucial factors to take into account when picking a case than its appearance.

The following are the primary motherboard form factors you’ll employ while constructing a bespoke PC:

A motherboard is a printed circuit board (PCB) that offers various connectors for components including the CPU, GPU, memory, and storage, and acts as a form of backbone for various components’ communication.

The sort of CPU you need to employ is unaffected by the motherboard’s form size. You can use the same CPU with an ATX, Micro-ATX, or Mini-ITX motherboard if it has the right socket.

Do you need to buy Windows 10 when getting a new motherboard?

Why do you think a motherboard is important when deciding to buy a computer?

In addition to the CPU, motherboards can link a wide range of components, including graphics cards, sound cards, networking cards, storage devices, and connections, among many others.

What should we look for when purchasing a motherboard for a desktop?

How much RAM does a motherboard need?

To fulfil your memory needs, it’s also crucial to consider the motherboard’s total RAM support capacity and the number of RAM slots it has. If all your computer will be used for is video streaming, web browsing, and simple gaming, then this factor won’t matter.

Still, if you play resource-intensive games or edit videos or photos, having the ability to add more RAM is essential.

How do you choose the best motherboard case?

Before making a choice, find out the exact dimensions of the motherboard and other components if you’re building a computer to ensure that all the parts will fit in the casing. As long as it fits, your motherboard will function in any casing. 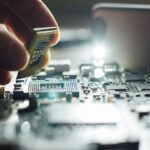 What Is AAFP On The Motherboard? 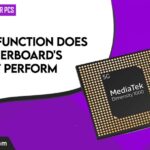